Fan Perspectives on the Summer Season

Last week, we asked our followers on Twitter for their responses to four critical questions surrounding this coming summer season. With three leagues having canceled their season, and five more undecided, the likelihood of having full seasons anywhere is diminishing by the day.

Question One: Assuming no vaccine, is it worth the risk to have a 2020 collegiate summer baseball season? 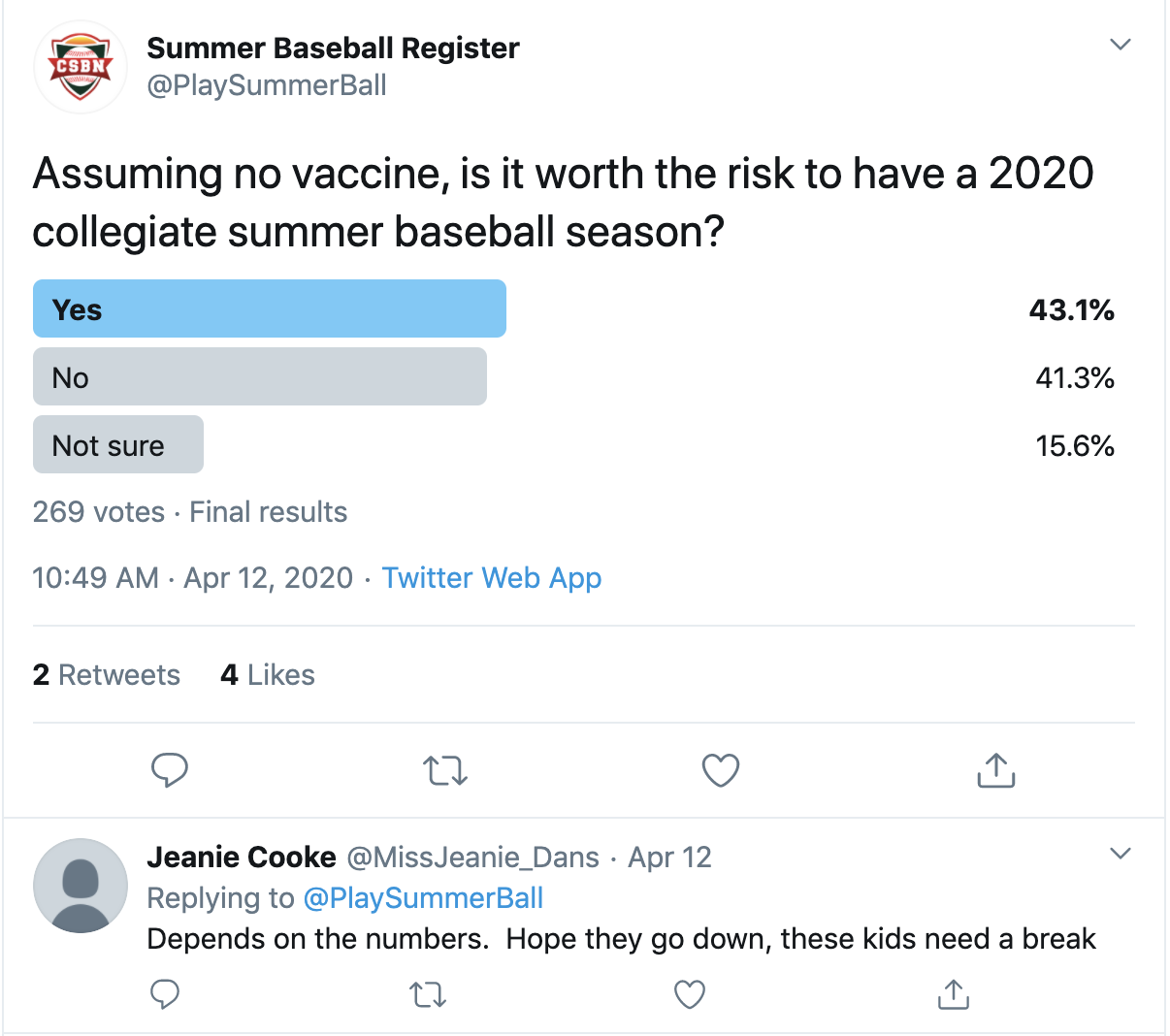 This question received nearly twice as many responses as any of our others, with 269 votes. Just over 43% of respondents or about 116 people said yes, it is worth the risk to have a summer season this year. An almost equal number of respondents, 111, said no it is not worth the risk. A small selection of responses, 42 people, said they are not sure if the risks are worth having a season.

As of April 20, researchers are indicating that we may still be about one year away from having a vaccine. It seems unlikely that there will be a vaccine this summer, so we may have to consider factors such as the availability of virus tests to determine if it is safe to have a summer season.

Question Two: Assuming no vaccine and mindful of the closeness of dugouts and bus travel, will you let your son play summer ball this season? 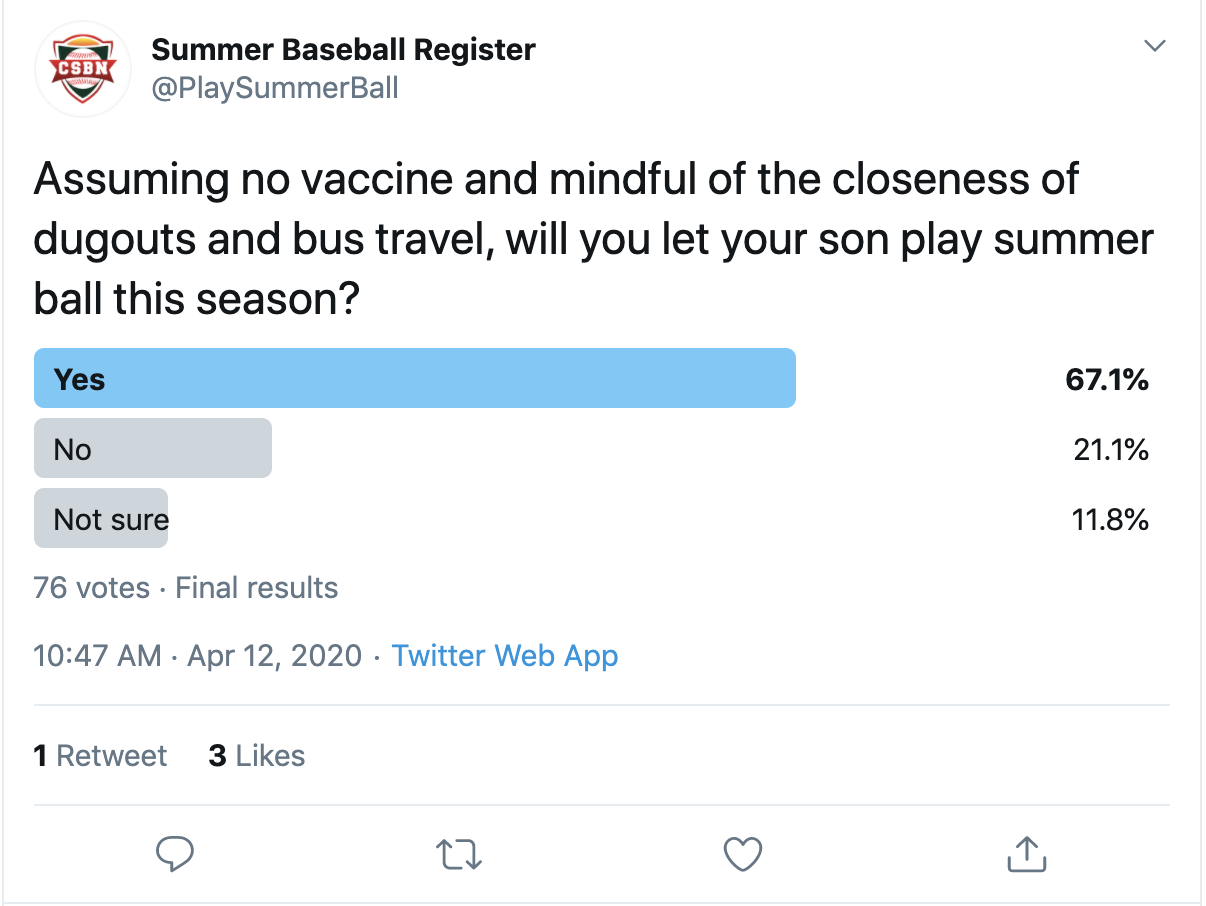 Once again, the likely lack of a vaccine does not seem to be deterring our followers from feeling comfortable with the summer season.

This is a smaller sample size, with only 76 responses, but 51 people said that they would let their son play. Responses were not limited to parents of current players, so some may be referring to a hypothetical child, but the idea of having many college-age players traveling and playing in close quarters does not seem to have people calling for cancellations of games. Sixteen people said they would not let their son play this summer, and 9 respondents are unsure.

Question Three: Assuming no vaccine, will you attend a collegiate summer league game this season? 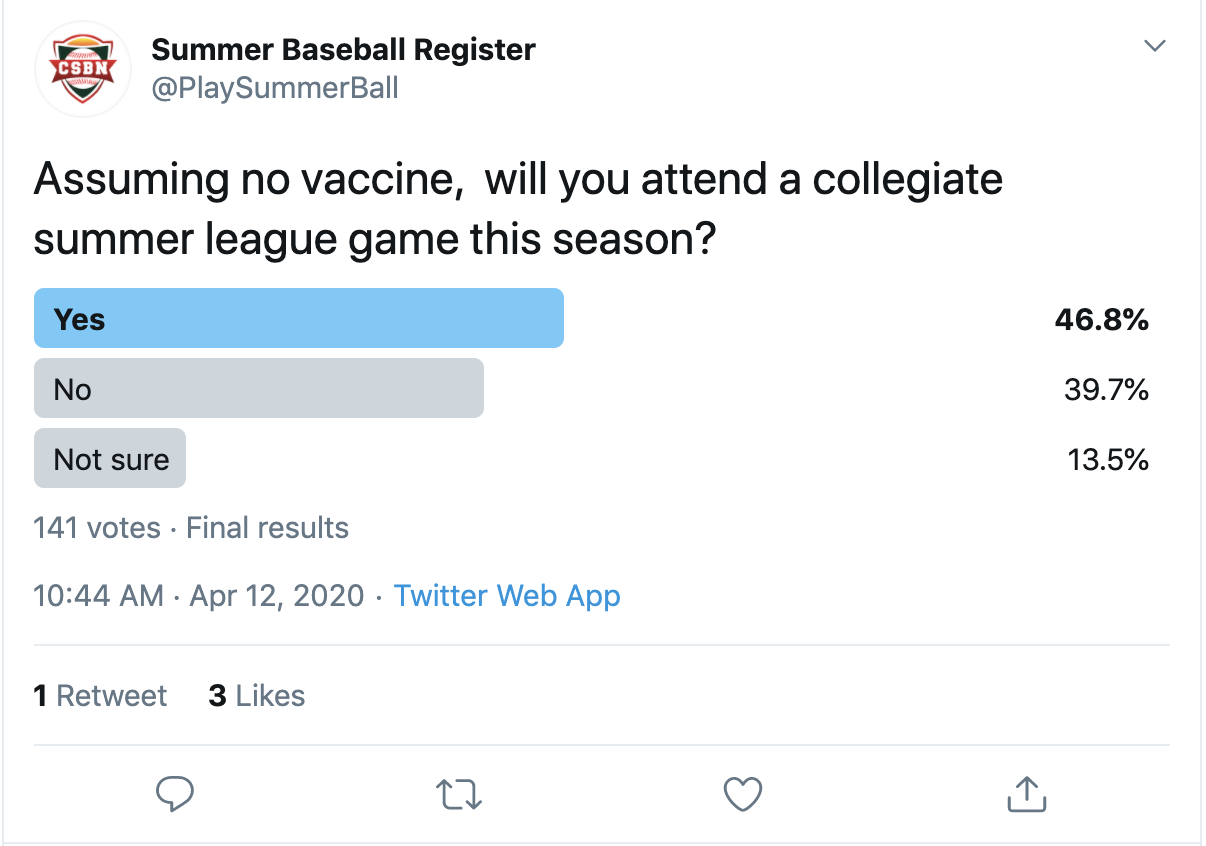 One idea that has been floating around for this summer is playing games without fans if large gatherings are still restricted. Some of the leagues we have spoken to are considering this possibility and may proceed with it if necessary. However, fans still seem to be willing to attend games, and the smaller crowd sizes at summer games may feel safer to them than the larger major league venues.

Out of 141 responses, nearly half of the people are willing to attend a summer league game if there is no vaccine available. Fifty-six people will not attend a game, and 19 people are not sure. Of course, each league has different ticket policies and some fans may already be holding tickets for games they want to attend this summer.

Question Four: As a parent of a college ballplayer, are your comfortable with your son staying with a host family (unknown to you) this season? 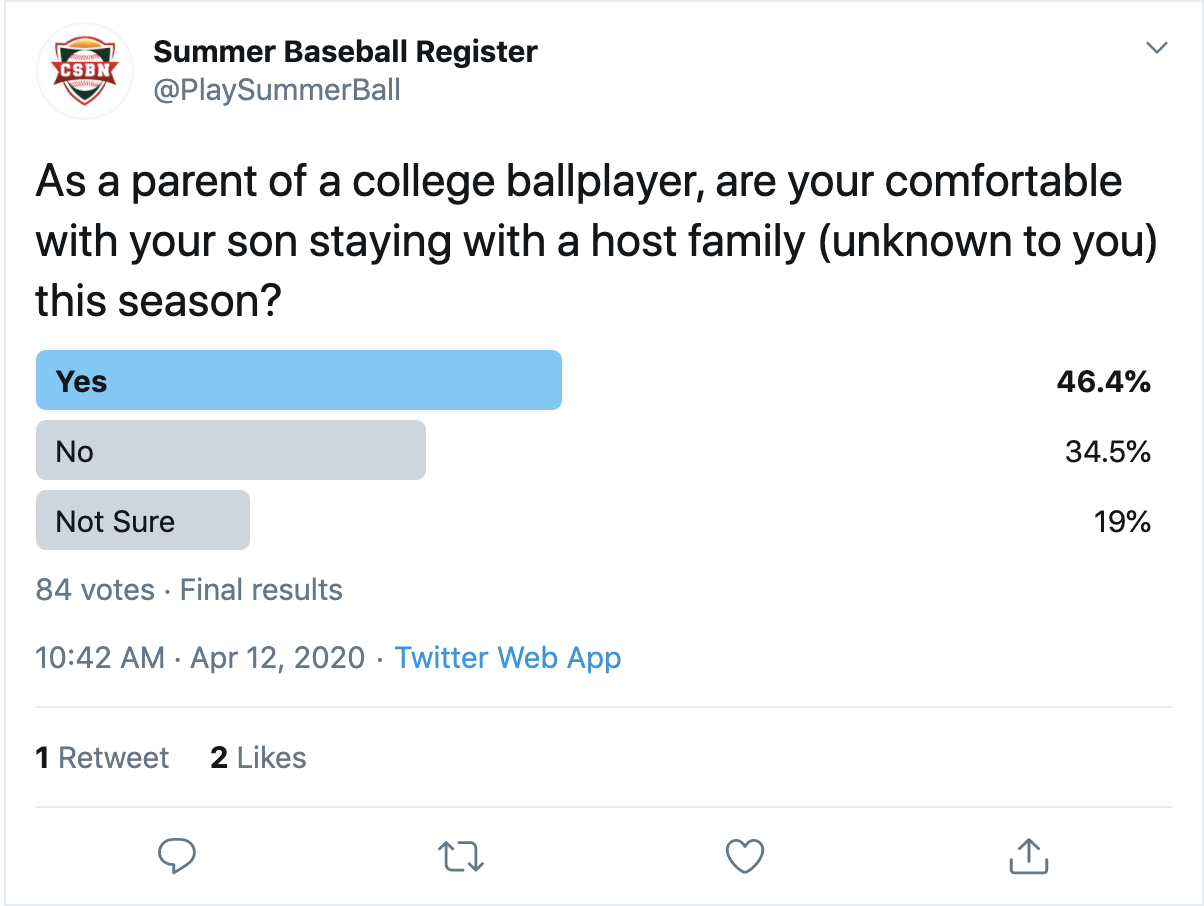 Another factor in the viability of a summer season is the availability of local host families. Many, but not all leagues, rely on host families to provide lodging and accommodations to players during the summer reason. In order to make this system work, parents must be willing to allow their children to travel to live with a new family, and the host families must still be willing to open their homes to the players.